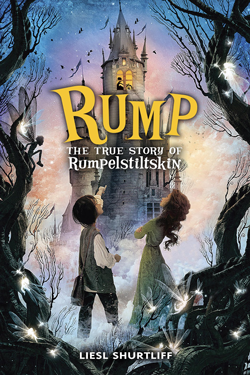 In a magic kingdom where your name is your destiny, 12-year-old Rump is the butt of everyone’s joke. But when he finds an old spinning wheel, his luck seems to change.

Rump discovers he has a gift for spinning straw into gold. His best friend, Red Riding Hood, warns him that magic is dangerous, and she’s right. With each thread he spins, he weaves himself deeper into a curse.

To break the spell, Rump must go on a perilous quest, fighting off pixies, trolls, poison apples, and a wickedly foolish queen. The odds are against him, but with courage and friendship—and a cheeky sense of humor—he just might triumph in the end.

« Hashbrown Winters and the Whiz-Tastrophe by Frank L. Cole
Trouble’s On the Menu by Warnock and Schow »

One response to “Rump: The True Story of Rumplestiltskin by Liesl Shurtliff”