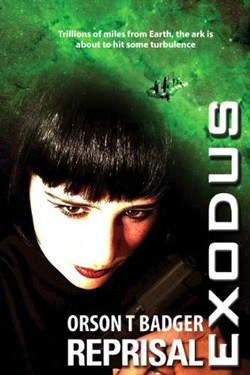 Deep in interstellar space the massive ark continues its long exodus. When the super assassin, Miah, nearly kills two of her cellmates her nemesis, Daalyn, is summoned to the ark’s brig where she has been held for the past two years. He abandons hope that she can be rehabilitated and sets a date for her execution.

For almost fifteen years the passengers of the ark have enjoyed relative peace and safety, but now demonstrations have broken out and two kids, Alan Black and Naomi Corb, realize many of their generation have forgotten the purpose for the exodus and not everyone is loyal to the Freemen. During an excursion to the bow of the ark they make a discovery that may destroy the exodus and plunge the ark into civil war.

When the Ark Council, led by the visionary Elias Bell, announces a hundred billion mile detour and a year long mining expedition to a small planetoid, a charismatic leader arises to challenge his authority. Elias must persuade the ark passengers of the crucial nature of their voyage or be removed from office. Along with the indispensable Terrence Black, David Corb, and their two kids, Elias must battle overwhelming odds and…Miah’s reincarnation. But he’s running out of time!

Cunning… mad… out of control… Miah’s back!