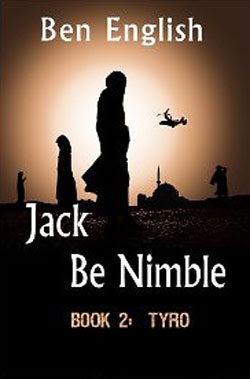 Caution: (from author) This book is firmly in PG-13 territory. The protagonist is LDS and his standards are reflected by the book’s themes, descriptions, and language.

The adventure that began in fire and terror in the night sky over London has brought
Jack Flynn and his friends together again, to strike a blow against the forces of a brilliant,
sadistic technologist bent on unspeakable destruction. Yet a single blow by itself has not
turned the tide of this secret war, and Jack must divide his team to realize any chance of defeating the hidden army arrayed against them.

Mercedes Adams evades the assassins sent against her only to be visited by a more dangerous, intimate threat from her past. As her path brings her closer and closer to Jack — on a mad dash from Paris to San Francisco to Los Angeles to Havana, Cuba — Mercedes discovers the hope of survival and salvation in the lessons learned years ago in the freshness of youth, lessons learned by an eager boy, a maverick, an earnest novice … a Tyro.

« Stealing Mercy by Kristy Tate
The Armor of Light by Karen E. Hoover »