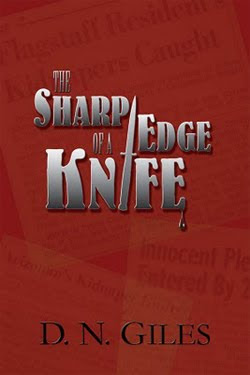 Title: The Sharp Edge of a Knife

Most people would have panicked, sitting bound and gagged on a boulder in the middle of the desert as I was, but for some reason, I didn’t. A strange kind of reassurance washed over me from somewhere deep within. Whether it was peace that I’d go quickly, or comfort that I was being protected, I wasn’t sure.

When Mel Petersen leaves for work on the morning of February 7, he has no idea what awaits him. A few miles from his house, Mel picks up a pair of young men who appear to be college students, hoping to prevent them from having to walk in the cold. What Mel doesn’t know is that the men are actually convicts on the run from the law who are desperate to get away by any means necessary.

When one of his passengers holds a knife to Mel’s throat, he has no choice but to submit to the demands of the criminals. Mel hopes he has what it takes to talk his captors into letting him live so he can return to his wife and children, but fears they will kill him before he has the chance.
Based on a true story, The Sharp Edge of a Knife follows Mel and his captors on an unforgettable ride that will have you questioning the depth of your faith and sitting on the edge of your seat as it grabs your attention from the first sentence and keeps you riveted until the very end.

2 responses to “The Sharp Edge of a Knife by D.N. Giles”