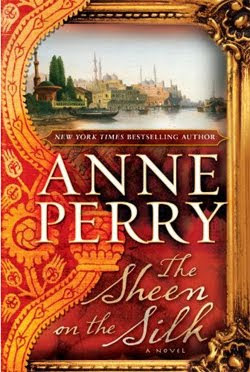 Title: The Sheen on the Silk

The Sheen on the Silk is an epic historical novel with a heart-stopping love story at its core, and a deep spiritual quest.

It’s set in the gorgeous, cosmopolitan and enlightened city of Byzantium, in the twilight years of its Empire. Surrounded by the fierce Ottomans to the East, Saladin and the infidels to the South, the barbarian European tribes to the North and the powerful Venetian Empire to the West, Byzantium’s Emperor badly needs an ally. The city has never recovered from its sack by the Venetians in 1204, and now, in 1272, it’s in acute danger. Another Crusade is being mounted, and Byzantium is in its path.

This is the city into which Anna arrives. A handsome woman with an unhappy past, she has just learned that her brother has been imprisoned for murder. Unable to believe that he’s guilty, she will stay in Byzantium until she can find out the truth and secure his release. However, she needs a way to move freely in all levels of society. This isn’t something she can do as a woman and as a stranger. She will pose as a eunuch; this cadre, while past its heyday, still has power and influence. And she will work as a doctor.

As the future of Byzantium grows ever darker, Anna struggles to navigate the complex truths of her brother’s guilt or innocence, the intrigues of the powerful, long-simmering revenge plots… and the even more perilous currents of her heart and her spirit. Only in Byzantium’s darkest hour does she discover the truths that will lead to salvation for Byzantium and the soaring path to the forgiveness and love of God.

« Fablehaven: Keys to the Demon Kingdom by Brandon Mull
The Sharp Edge of a Knife by D.N. Giles »

One response to “The Sheen on the Silk by Anne Perry”