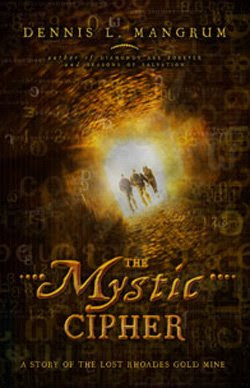 When Carver Nash, a military hero and ex-Army Ranger, retires from international combat, he moves back to his farm in Marion, Utah – as far from notoriety as he can get. Then one day, while trying to remove a stump from his field, he discovers an ancient-looking box containing Spanish gold and an encrypted message divulging a purported trail to the Lost Rhoades Mine.

Carver is afraid that discovery of gold will bring the media and a flood of gold seekers to Marion and wants nothing to do with the gold or the quest. But his neighbor, a history buff named Rylan Edison, believes the document is real. Rylan recruits his daughter, Cassandra, a math major at Yale University, to decipher the message. When Rylan is kidnapped, Carver and Cassandra must put aside their distaste for each other, unravel the code, find the mine, and rescue Rylan – all while eluding a group of Ute Indians determined to stop anybody searching for the Lost Rhoades Mine at any cost. Working together, Carver and Cassandra race to solve one of treasure hunters’ longest standing mysteries – while learning about another kind of treasure in the process.

One response to “The Mystic Cipher by Dennis Mangrum”