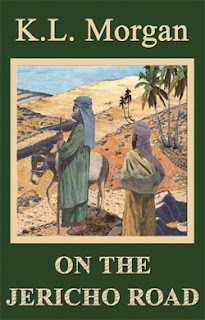 Title: On the Road to Jericho

Jethen has lost his faith. Raised a devout Samaritan, he was taken from Samaria in his teens when his father moved their family to King Herod’s Jericho. In the hustle and bustle of his family’s trade, their yearly pilgrimages and Sabbath worship waned. Even though Jethen became acquainted with the ways of the world, he was still a Samaritan despised by the Jews.

Sherai, his childhood friend, took a different path. Married off to a prosperous family in Sychar, she found solace in her beliefs. When her husband proved to be cold and distant, her reliance on God warmed her. Jethen, stopping each year on his travels to sell in Sychar, found himself admiring her devout convictions and gentle goodness.

Years later, at the death of his father, Jethen returns to Sychar, heart-sore and confused. There he discovers Sherai has been unjustly disgraced and has fled from home. Jethen begins a search for Sherai, realizing that without her, his return to Sychar would have no meaning. Will he find her? If he does, will she be able to restore life’s purpose and help him recapture his once simple faith in God?

On the Jericho Road is a powerful biblical novel that ignites deep emotion and offers a new understanding of love, loyalty, and human relationships. A story unfolding over 2000 years ago reveals the impact Christ had on the people he lived among and taught.