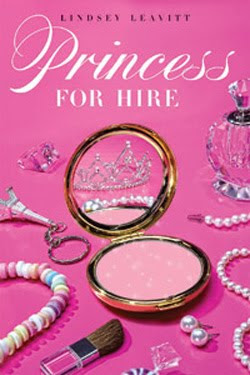 When a flawlessly dressed woman steps out of an iridescent bubble and wants to know, like, now if you’d like to become a substitute princess, do you

For Desi Bascomb, who’s been longing for a bit of glamour in her Idaho life, the choice is a definite C–that is, once she can stop pinching herself. As her new agent Meredith explains, Desi has a rare magical ability: when she applies the ancient Egyptian formula “Royal Rouge,” she can transform temporarily into the exact lookalike of any princess who needs her subbing services. Dream come true, right?

Well, Desi soon discovers that subbing involves a lot more than wearing a tiara and waving at cameras. Like, what do you do when a bullying older sister puts you on a heinous crash diet? Or when the tribal villagers gather to watch you perform a ceremonial dance you don’t know? Or when a princess’s conflicted sweetheart shows up to break things off–and you know she would want you to change his mind?

In this hilarious, winning debut, one girl’s dream of glamour transforms into something bigger: the desire to make a positive impact. And an impact Desi makes, one royal fiasco at a time.

« The Mark by M.R. Bunderson
Fablehaven: Keys to the Demon Kingdom by Brandon Mull »