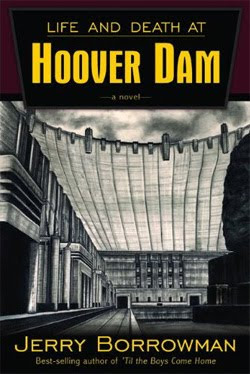 It’s 1931 and men are desperate for jobs. A lucky few will get to work in the searing heat of the Nevada desert on the massive Hoover Dam, the single largest public works project in history. Their goal is to tame the mighty Colorado River with a dam that
towers sixty stories high from the base of the canyon to the crest of the dam and that will create the largest manmade lake in the world.

Life and Death at Hoover Dam tells the story of a handful of these men, and the sacrifices they endured from choking on gasoline fumes in five-story tunnels that exceeded 120 degrees to dangling by slender cables from the thousand foot walls of the canyon to blast the loose rock and gravel into oblivion. And together they’ll fight the river with all their might, and perhaps their lives, as flash floods threaten to destroy all they have worked to accomplish.

Meet the Conroy brothers; David an engineer who works directly with Frank Crowe, Chief Engineer and the world’s foremost builder of dams, and Pete, his older brother who is as wild as the Colorado River itself. Pete is a crew foreman, first working on the scraping and blasting of the sheer cliff walls into which the dam must be anchored, and then in the massive forms where seven million tons of concrete will settle—some say to last a thousand years. Sean O’Donnell, a scrappy Irishman who worked on the Empire State Building in New York City whose family desperately wants him to come home. And Tony Capelli, the worker who will pay the greatest price of all—a farmer from southern California whose land will become verdant and productive once the flow of Colorado River water is assured. But prejudice is rampant against those of foreign birth, even though American citizens, and Tony will face mortal danger as he struggles to stay on the job and feed his family. In the end, these men and the 20,000 others who worked on the dam will build a monument that will make possible the palm trees of Los Angeles and the desert oasis of Phoenix. This is the story of their lives—the men who built the matchless Hoover Dam.