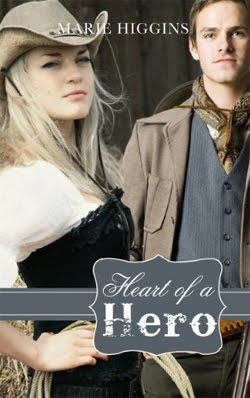 Title: Heart of a Hero

There’s a new hero in town…

When Summer Bennett returns to Richfield after a five-year stint at her aunt’s finishing school, she discovers a lot has changed. Her father has suffered a crippling injury, and Summer is desperate to get the money to pay for surgery that could allow him to walk again. She hears of a reward offered for the capture of a cunning gang of bank robbers, and her years of etiquette training fall by the dusty roadside.

What Summer doesn’t count on in her quest to capture the bandits is the competition from her family’s longtime friend, Jesse Slade. Now a deputy marshal and local hero, Jesse keeps thwarting Summer’s plans, just like he did when she wore pigtails. She would like nothing more than to use Jesse’s head for a slingshot target, but soon Summer finds her aim shifting from his head to his heart. Problem is, Jesse is engaged to her sister Violet.

For seven years, little Summer Bennett was the burr under Jesse’s saddle. Now he feels a different irritation as Summer is always on his mind, whether he wants her to be or not. But Summer’s father expects him to marry Violet, and he won’t let him down. So why does Jesse find himself encouraging Summer’s attentions, and why do sparks fly every time they are together?