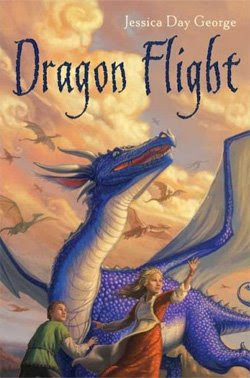 With the Dragon Wars over, Creel finds herself bored with life as a seamstress. Then word comes that a bordering country has been breeding dragons in preparation for an invasion. Never one to sit around, Creel throws herself headlong into an adventure that will reunite her with her dragon friend Shardas, pit her against a vicious new enemy and perhaps rekindle a friendship with Prince Luka that seems to have gone cold.

In far off Citatie, Prince Luka has made an alarming discovery: the southern country’s entire army is mounted on dragons, and they plan to attack Feravel. It’s up to Creel to gather her dragon friends and lead them south, first as spies, then as soldiers, in a battle against an unexpected enemy. But the Citatian dragons outnumber those from Feravel, and some of Creel’s friends are still recovering from the first dragon war. Will they be able to win this fight, and will they still have a home to return to even if they do?

« Silhouette by Nancy Cratty
Promise of Spring by Kristen McKendry »