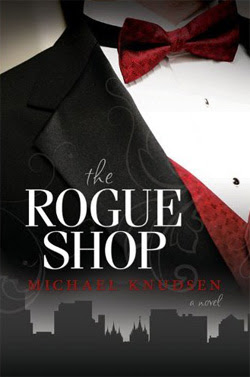 “Swear you will never become a Mormon.”

It was more likely I’d become a vegan. “Don’t be ridiculous, Aunt Jean. I’m not going to become a Mormon.”

“Swear it on the Bible.”

Trying to escape from his Texas Baptist upbrining and a troubled past, Chris Kerry came to Salt Lake City to get an education—and nothing else. But keeping his promise to stay away from the Mormons proves difficult, especialy with two cute college girls living across the hall. And when Chris finds a job at a tuxedo shop, his promise unravels as he discovers new friendships, hidden secrets, and a lost heritage he never imagined he had.

The Rogue Shop illuminates how we recognize truth even in the most trying circumstances. Michael Knudsen’s hilarious debut will remind you about the value of faith, family, and friends as Chris learns from his past to move forward into a better future.

2 responses to “The Rogue Shop by Michael Knudsen”