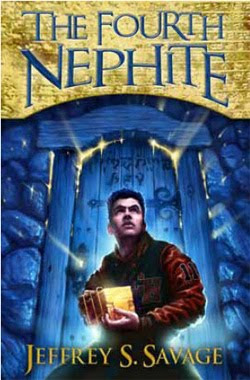 Kaleo Steele is starting to cut seminary and hang out with some new “friends”; in fact, he’s not even sure what he believes anymore. When his seminary teacher finds him at the wrong place at the wrong time, Kaleo is in jeopardy of missing his high school team’s regional football game—a game where college scouts will be coming to see him play. But his seminary teacher realizes that much more than a game is at stake, and sends him on a soul-searching quest.

Guided by Ladan, a mysterious old blind man, Kaleo pushes through a battered wooden door only to find himself in Palmyra, New York, in the fall of 1827. Soon he is caught up in a battle between treasure seekers—led by Allaster Blackburn, a necromancer hired to steal the gold plates—and the young prophet Joseph Smith, who is sworn to keep them safe. In his quest to find a key that will send him back to his own time, Kaleo will have to decide what to believe. Before it’s too late.

« The Bridge by Stacy Averett
Cold as Ice by Stephanie Black »

One response to “The Fourth Nephite by Jeffrey S. Savage”