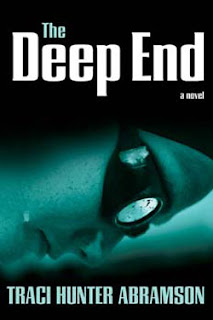 Matt’s hands balled in frustration. . . . He couldn’t even acknowledge that he knew the dark-haired beauty down the street-much less that he was married to her. . . . He had walked into this marriage knowing full well that he would be married to a woman in the Witness Protection Program, and that they would have to spend their first year of marriage pretending they didn’t know each other.

But little do CJ and Matt know the extent of the danger and loneliness that will haunt their lives. A world-class swimmer with Olympic aspirations, CJ faces overwhelming odds that threaten to drown all her hopes and dreams. Will the deep end prove to be a dead end for CJ and Matt?

In a story where reality is as tentative as the waters of competition, and happiness is as elusive as the forces of evil that conspire to end all their dreams, CJ and Matt’s race for safety becomes a marathon of fear.

2 responses to “The Deep End by Traci Hunter Abramson”