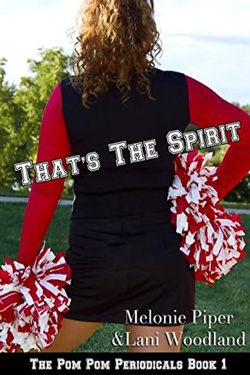 When Chelsea gets nervous, embarrassed, or upset, she usually laughs it off, literally. But it’s not a happy sound. No, it’s an insane cackle, like the evil villain in a B movie horror flick, and she can’t control it.

So when she drops Alicia, her archenemy who just stole her boyfriend, during their cheer routine at a school assembly, it’s bad. But laughing like a maniac while Alicia writhes in pain from the leg she just broke, that’s a disaster. Chelsea doesn’t think it’s funny, but her annoying coping mechanism pops up and the whole school thinks she dropped Alicia on purpose.

Chelsea is kicked off the cheer team for her unsportsmanlike conduct and shunned by her classmates. With a cheer scholarship off the table, her only chance to afford her dream college is through academics. She’s getting good grades, so that would be fine, except she’s been paired with Cody, Alicia’s twin brother, to work together on the most important project of her senior year.

Cody isn’t happy to be forced to interact with Chelsea either. He has hated her since elementary school, for Chelsea’s treatment of Alicia. He plans to use the time with Chelsea to give her a little of the payback she deserves. The insults, pranks and sparks fly as the two find a way to get a passing grade without kissing… um, killing each other first!