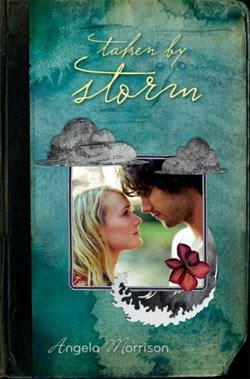 Leesie Hunt has many rules: No kissing. No sex. No dating outside the Mormon faith.

When Michael Walden—a deep-sea diver who lost his parents in a violent hurricane—arrives in town, Leesie sees someone who needs her. They fall for one another, even though his dreams are tied to the depths of the ocean and hers to salvation above.

Will their intense chemistry be too strong to resist?

Leesie and Michael must make the hardest choice of their lives: whether to follow their beliefs or their hearts.

Readers will be swept away by this tale of forbidden romance told in online chats, Leesie’s chapbook poems, and Michael’s dive log. It’s as steamy as Twilight and just as clean.

« Everything Is Fine by Ann Dee Ellis
The Soul Alliance: The Thorn of Gooze by Charles Streams »

2 responses to “Taken by Storm by Angela Morrison”