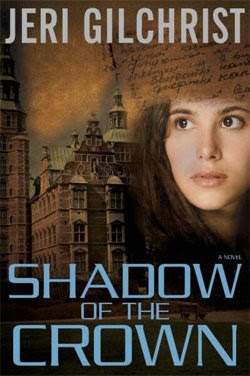 Title: Shadow of the Crown

Teira Palmer, a bright, savvy young woman who was raised on the fairy tales of Hans Christian Andersen, receives a plum assignment to help in the acquisition of a Scandinavian branch of the international telecommunications company for which she works. She returns to her mother’s birth country with mixed feelings.

As a child, Teira was tucked into bed with the magical stories of Hans Christian Andersen intermingled with Danish family history: stories of kings and queens, beautiful castles, and golden crowns in a kingdom far away across the sea. There, loyal and courageous subjects lay down their lives for their country. The bravest and best of all the warrior princes was her own grandfather. Teira had grown up idolizing him until the day reality stepped in and showed that the hero of her dreams was actually a traitor.

Teira’s grandfather, Soren Pedersen, had been involved as a saboteur in the resistance movement and part of the Freedom Council during the occupation of Denmark during WWII. Soren died only weeks before the war ended during the act of his treason. He had betrayed kingdom, crown, country and, Teira thought resentfully, his family.

Teira arrives to find that her ancestral home has fallen into serious disrepair and learns that an old man and his menacing son know more about her grandfather’s death—and his life and work on the Freedom Council—than they are willing to say. It makes her wonder: was Soren Pedersen a traitor, or was he the honorable man her grandmother still believed him to be?

Soon Teira is balancing her work at Com Tech with a personal quest to turn Denmark upside down if necessary in order to finally uncover the truth. At her side is Christian Tanner, the charismatic head of the company who is knee-deep in mysterious trouble of his own. As the two draw closer to the truth – sometimes by accident – danger increases. It’s a race against time to discover the secrets once thought to have been buried with the past.

Only one thing can bring the mystery of Teira’s grandfather’s death to light, but it may cost another’s life in the process.