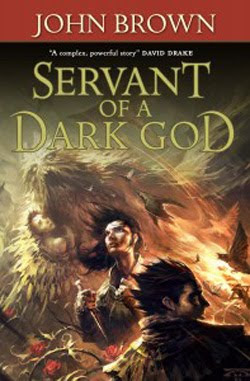 Title: Servant of a Dark God

The launch of a towering new fantasy series introduces an elaborate new world, a strange and dark system of magic, and a cast of compelling characters and monsters. Young Talen lives in a world where the days of a person’s life can be harvested, bought, and stolen. Only the great Divines, who rule every land, and the human soul-eaters, dark ones who steal from man and beast and become twisted by their polluted draws, know the secrets of this power. This land’s Divine has gone missing and soul-eaters are found among Talen’s people.

The Clans muster a massive hunt, and Talen finds himself a target. Thinking his struggle is against both soul-eaters and their hunters, Talen actually has far larger problems. A being of awesome power has arisen, one whose diet consists of the days of man. Her Mothers once ranched human subjects like cattle. She has emerged to take back what is rightfully hers. Trapped in a web of lies and ancient secrets, Talen must struggle to identify his true enemy before the Mother finds the one whom she will transform into the lord of the human harvest.

2 responses to “Servant of a Dark God by John Brown”