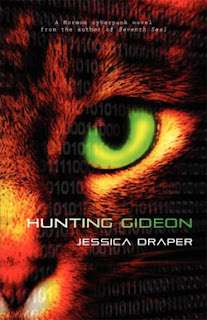 Tracking hackers and crackers for the FBI’s National Infrastructure Protection Center looks like a vivid video game to an outsider, but the outcome of the play is deadly serious. Through her online feline avatar, Sekhmet, Sue Anne Jones stalks the V-Net, the ultimate virtual-reality interface, in pursuit of evil in all its online forms. Her partner, ex-cracker Loren Hunter, provides cynical commentary along with his expertise in the V-Net’s shadier alleys.

Their days of busting routine identity thieves and insidious corporate spies end when they get a new assignment: Hunt down a cyber-terrorist calling himself Gideon, who has infiltrated the financial system, rerouted supply lines, and murdered the supervisor of an automated factory. Now Gideon is sending taunting messages, quoting scripture, and warning Sue that she must join his crusade or suffer—along with the rest of the virtual world—when he takes total control of the V-Net.

Written by the author of the Last Days adventure trilogy, Hunting Gideon is a near-future cyberpunk novel with an optimistic Mormon twist. Incorporating elements from the hard-boiled detective novel, film noir, and postmodernist prose, much of the novel’s action takes place online in cyberspace, blurring the border between actual and virtual reality. Hunting Gideon sends Sue and Loren on a wild chase as they scramble to avert the ultimate online disaster.

One response to “Hunting Gideon by Jessica Draper”