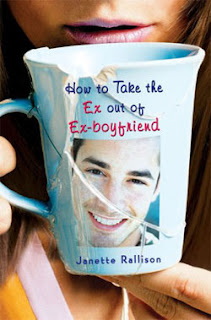 Title: How to Take the Ex Out of Ex-Boyfriend

Boyfriends are supposed to be loyal, caring and handsome. Giovanna’s boyfriend Jesse may have the last two down, but he’s seriously lacking in the loyalty department. When her twin brother, Dante, runs for student body president, Jesse campaigns for the opponent. In the heat of the moment, Giovanna dumps Jesse and becomes Dante’s campaign manager. But she almost immediately regrets her decision. Beating the mayor’s son at school politics and winning her boyfriend back are going to take a lot more risk than Giovanna ever dreamed she’d take.

« First Day by Allyson B. Condie
Book of a Thousand Days by Shannon Hale »