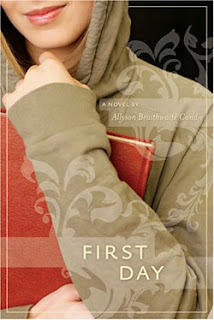 For the last two-and-a-half years, Andrea Beckett has been attending college in New York, caught up in the whirlwind of finals, career options, and falling in love.

Joel Hammond is attending the same college on the faith of an answered prayer. Feeling a little lost and alone, he’s still not sure why he has chosen to be so far from home. Then he’s asked to teach early-morning seminary with Andrea and begins to feel a little less lonely.

Though Joel and Andrea’s class of eight high-school students is small, the problems the students are dealing with are large. High-school senior Cate is a down-to-earth girl who can’t decide whether leaving home after high school is her greatest wish or her worst nightmare

And far from New York, Andrea’s brother, Ethan, is serving a mission in Brazil. The language is new, the culture is different, and sometimes being Elder Beckett is harder than he expected, but Ethan is determined to make every day the best day of his mission.

2 responses to “First Day by Allyson B. Condie”