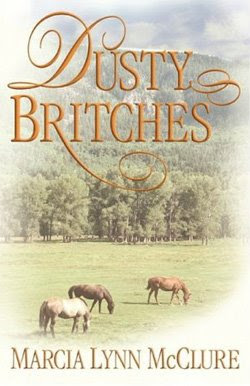 Dusty’s heart panged a twinge when she saw the bull whip strapped to the saddle of one of the horses tied to the corral fence. “Why today?” she wondered. Why was her memory tarrying on that young cowhand from five years ago?

“Well…now,” a deep, masculine voice said from behind her, “if it ain’t Miss Dusty Britches!”

Dusty felt the color drain from her face, felt the blood seem to drain from the rest of her body and puddle in her feet. She felt dizzy and nauseated all at once. There was only one person on the whole of the earth who ever called her Dusty Britches, and that was the cowboy who gave her the nickname in the first place.

Dusty slowly turned around to see standing before her a man whose eyes were those belonging to a boy she’d once known—a boy who had grown into a man.

Angelina Hunter was seriously minded—and it was a good thing. Her father’s ranch needed a woman who could endure the strenuous work of ranch life. Since her mother’s death, Angelina had been that woman. She had no time for frivolity; no time for a less severe side of life. Not when there was so much to be done—hired hands to feed, a widower father to care for and an often ridiculously light-hearted younger sister to worry about.

No. Angelina Hunter had no time for the things most young women her age enjoyed. And yet, Angelina had not always been so hardened. There had been a time when she boasted a fun, flirtatious nature even more delightful than her sister Becca’s—a time when her imagination soared with adventurous, romantic dreams. But that all ended years before at the hand of one man.

Her heart turned to stone, safely becoming void of any emotion save impatience and indifference. Until the day her dreams returned, the day that the very maker of her broken heart rode back into her life. As the dust settled from the cattle drive that brought him back, would Angelina’s heart be softened? Would she learn to hope again? Would her long-lost dreams become a blessed reality?

« Promises to Keep: Diane’s Story by Dean Hughes
The Indigo King by James A Owen »