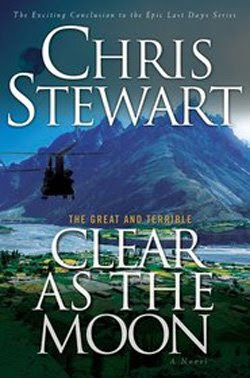 Title: The Great and Terrible: Clear as the Moon (Vol. 6)

THE EXCITING CONCLUSION TO THE EPIC LAST DAYS SERIES

“We have this one chance,” Brucius told Sam. “If you can get him, if you can locate and extricate King Abdullah, then we can punish him. Justice will be served. We could stop the final world war. Find him, we’ll try him and hang him. Don’t, and we’ll have to retaliate.”

The United States, stunned by the nuclear detonation in Washington, D.C., and further crippled by the EMP attack on the whole country, is on the brink of destruction. The unscrupulous leaders who have banded together to toss out the Constitution and divide the ruling of the world between themselves have all but achieved their objective.

But they haven’t factored in one thing. They haven’t considered the chance, however slight, that good people remain who will continue standing up for what they believe in. A daring plot to reinstate Brucius Marino to his rightful position as president of the United States, with an even more audacious plan to bring King Abdullah to justice—everything hinges on the courage and skill of Sara and Sam Brighton and their friends. The thrilling conclusion to The Great and Terrible series will keep you riveted to the very end!