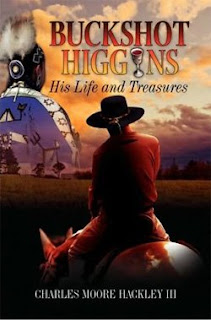 The intrigue of the Old West comes alive in this new and refreshing novel by C. M. Hackley. Buckshot earns his name, like so many long ago, by confronting a major challenge—in his case, a mountain lion who has stymied his effort to become a traditional Navajo man. He goes on to become enmeshed in both the white man’s world as a trader, but also as an accepted member of the Navajo culture. His focused efforts to learn about the religion of his dead parents build him into a real leader of his time and community in northwestern New Mexico. Hanabah, a strong-willed woman who has survived the Long Walk of the Navajos, takes him under her care when she finds him almost at death’s door and raises him in the traditional Navajo culture. She, having been told of the location of some of Montezuma’s fabulous treasures, takes him to the hidden lode. This provides Buckshot with a poke that allows him to help others in many ways and to even find his missing sister who was taken by a passing wagon train as he lay dying. The story is intense as May Fern comes into his life and becomes his lifelong partner and travels with him to become sealed in the St. George Temple for all eternity. Some try and stop them; but with ingenuity, planning, and funds to perpetuate their dreams, they preserve. There is murder, sickness, hardship, and loss of loved ones; but the prevailing spirit is always one of hope bound with faith that leads to brighter days. This is a true Western saga based on real experiences that happened and can now be told.

« He Is Coming by Wendie L. Edwards
Never Again by Katherine Adams »