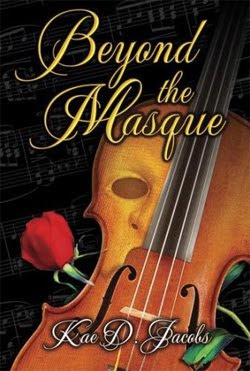 Title: Beyond the Mask

Beyond the Masque is Kae’s first novel, and one where the importance of believability was all encompassing in uniting word with page. It is a sequel to Gaston Leroux’s beloved story of The Phantom of the Opera.

The book opens with a devastated Phantom (Erik) just returned from his final interview with the Persian, as referred to in the closing pages of Leroux’s work. Christine left days ago with Raoul de Chagny, having made her choice after being given her freedom by Erik to do so. Erik is resigned to dying, contented and gratefully happy for the ‘taste’ of consideration Christine bestowed upon him. Then the once predictable becomes twisted when she returns to him as the unimaginable begins to form a foundation of possibility. Beyond the Masque ignites the late 1800s through inclusion into the historical places of Paris, Amiens, and the Breaton coast of France. And from there, the story develops into one of redemption, trust, friendship, forgiveness, and ultimately, love. Change is a constant as Erik Gautier strives to deserve the woman who has finally seen past the surface—his monstrous face and past—to realize her love of the man.

« Within the Flame by LeeAnne Hanks
Dream Walk by Meg Allison »

One response to “Beyond the Mask by Kae D. Jacobs”