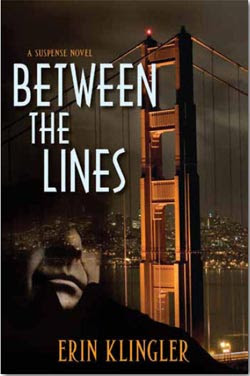 Title: Between the Lines

Sydney Hallam, hard-line journalist for the San Francisco Chronicle, is poised for action after receiving a tip from a mysterious source that criminally implicates several influential power brokers—but her source is gunned down before he can disclose any details. Days later, Salt Lake Tribune reporter Justin Mickelsen receives a letter from a childhood friend — the murder victim — written just prior to his death, leading the two reporters to team up in San Francisco to expose the scandal.

In the intensity of the investigation, the pair’s attraction quickly grows, along with proof of money laundering, drug trafficking, and grand theft. But as the evidence builds, so do the tempers of certain billionaires and heavy-hitting politicians — soon it seems the dangerous career path chosen by the two ace reporters can only lead to a very dead end.