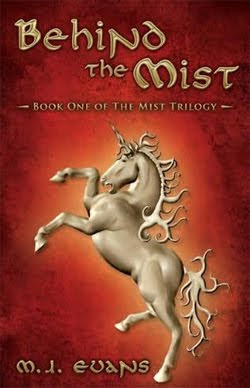 Title: Behind the Mist

Nick and his family spend their summers in the Colorado mountains where he first meets an exceptional horse named Jazz. What begins as a strong bond between a horse and his young rider goes beyond extraordinary when tragedy launches them on a thrilling journey to the land behind the mist.

Celestia is the immortal home to noble and great horses that, based upon the virtues they developed on earth, earned the privilege to be given the power and status of a unicorn. Once they receive their horns, they serve as guardian angels to animals on earth.

Nick is the only human in Celestia–or so it first appears. As they learn more about this magical land, Nick and Jazz are compelled to embark on a mission into the Dark Kingdom that is ruled by the evil unicorn, Hasbadana. Though aided by special skills and unusual allies, the boy and horse confront powers that threaten to destroy them.

Join Nick and Jazz as they battle the forces of evil and demonstrate the transcendent power of loyalty and love.