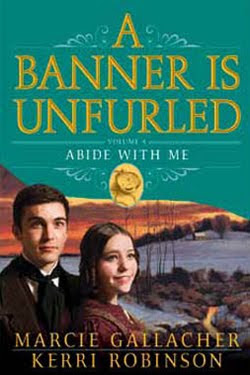 Title: A Banner Is Unfurled: Abide With Me (vol. 4)

Kirtland, 1838. Among the Saints who remain, Julia Johnson and her children endure the bitter winter in poverty, struggling amidst illness and persecution to prepare to join the leaders of the Church in Far West. Meanwhile, Almon rises as an influential leader among the Canadian Saints and seeks land for them to settle in Missouri. Spring marks the joyful reunion of Delcena and her husband, Lyman, who has been in hiding. But separation looms large as the couple departs for Far West and Ezekiel realizes with dread that most of his family will soon follow.

Indeed, as summer approaches and the Kirtland Poor Camp begins its historic exodus, Ezekiel is left behind with only Almera to comfort him – but she wants nothing more than to join her family in their journey out of Ohio, away from her harsh-tempered, controlling husband. Typhoid fever strikes the traveling camp, and those already gathered in Missouri are shaken as mobs become more aggressive and overzealous Danites step in to force order. By the time Almon’s company of Canadian saints arrives in Far West, the city is nearly under siege, and the lives of many innocent Saints are threatened — including that of the Prophet himself.