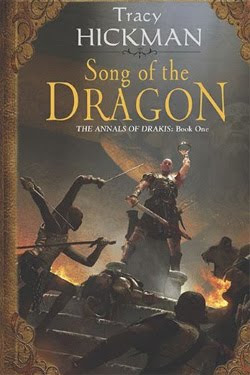 Title: Song of the Dragon (Volume One of the Annals of Drakis)

Drakis returns from the War of the Nineth Throne — the last of the great dwarven wars — with a prize for his elven master: a strange dwarven bard and a stone which the dwarf claims to be the greatest treasure of all the kingdoms. He hopes that this prize will win him his hearts desire: pairing with his beloved Mala, a human female slave in their master’s household.

But the dwarf tells Drakis that his life is a lie: that the elven devotions held each night hide from his mind every bad thing that happened to him during the day … and keeping him a contented slave forever. When Drakis is nearly beaten to death by his master and then suffers even worse abuse by his daughter — all predicted with horrifying accuracy by the dwarf — Drakis begins to question the very devotions that are at the heart of elven life. But it is only when the dwarf destroys the well of house magic that the spell collapses…

Thus begins the odyssey of Drakis, an escaped slave, who discovers that his name is at the heart of a prophesy that threatens the existence of the oppressive Rhonas Empire itself. Yet as destiny seems to close in on Drakis from every turn, he himself tries desperately to avoid fate.