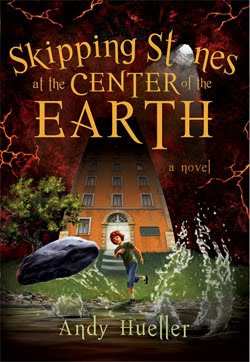 Title: Skipping Stones at the Center of the Earth

Twelve years ago, three men disappeared; one of these men is gone for good. Two years later, another man dropped from the face of the Earth. In four years, a young girl would vanish. A piece of hardware connects them all.

This book does not belong to any of these missing persons.

But their stories matter, patient reader.

They will matter to you (I hope). And they matter to a red-headed twelve-year-old boy—the boy to whom this book does belong.

No matter. All will be set straight in good time.

Twelve-year-old Calvin Comet Cobble lives at Hidden Shores Orphanage, which sits at the very center of planet Earth. At Hidden Shores, Cal chokes on strange food; tries to avoid the school bully, his acrid pits, and his uncompromising fists; sits through incompetent and cruel classroom instruction; fears the volcanic-tempered and megaphone-voiced Principal Warden; and does his best to never, ever, ever think about the dangerous prison and the murderous criminals with whom the orphanage shares the island-city of Robert (the very Pit of the Planet). And then Cal meets Mr. E, the mysterious man who mows Hidden Shores’ front lawn and who can skip a stone clear across Lake Arctic, and everything changes.

Skipping Stones at the Center of the Earth is a novel for older elementary and early middle-school readers in the dark, redemptive tradition of Roald Dahl, told in the piece-it-together style of Louis Sachar’s Holes. It’s a novel about a scared and lonely (not to mention wildly red-haired) orphan who finds friendship and courage in the unlikeliest of places. And as readers get to know and root for Cal—who, over the course of the novel, begins to speak his mind, skips his first stone, and finds out who he is—they also learn how Robert, America’s youngest significant city, came to be. Three story lines come crashing together as Cal and his friends venture toward the scariest place inside the Earth.

Available for purchase from: