When Supermom joins Dad on his latest project, sixteen-year-old Morgan is left at her aunt’s. Instead of dating the cute boy from the track team, she will now have to spend the summer keeping a sane distance between herself and her aunt’s six boys.

Morgan plans on the summer being awful. Encountering an army of spiders and getting lost while running should not surprise her. What she never expects is to stumble across an abandoned house—her parents own an abandoned house her uncle committed suicide in. Someone ought to have mentioned that before now.

The past haunts Morgan’s dreams. The more she remembers and learns, the more she realizes even her cousins are not what she thought they were. Worse, she has somehow become a reflection of her uncle and everything her parents are running from. Morgan wants to hold on to the things she loves—running, her cousins, the bits of her family still intact—but as the summer passes, she starts to wonder if she’s going to lose everything instead. 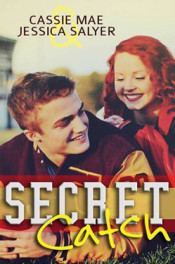