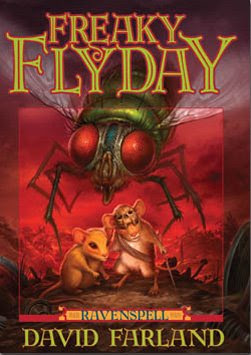 Series: Of Mice and Magic, The Wizard of Ooze

After saving Oregon from a nuclear crisis and revealing the plight of enslaved micedom to the human population, Amber, the valiant mouse wizard, and her partner Ben, the once-human mouse, head to Disneyland for a much-deserved vacation. But greater trouble lurks ahead.

Mouse mentor Lady Blackpool prophesies that the Ever Shade, an ancient evil force, will soon be returning to the earth. Then the mice receive word that Belle Z. Bug, a giant mutant fly associated with the Ever Shade, has hatched in a Los Angeles landfill. In the twitch of a whisker, Belle Z. Bug’s seductive multilevel marketing campaign enslaves a massive army of unsuspecting flies and throws the human race into chaos.

When the mice’s plane falls under attack, they join forces with the indomitable Harold Shortzenbeggar (governor-extraordinaire of California) to confront their common enemy. But their recent battle with evil wormlord Sebaceous Ooze sapped the heroes’ vital powers. Will the victories won in Of Mice and Magic and The Wizard of Ooze come to naught as they face the sinister Lord of the Flies?

One response to “Ravenspell: Freaky Flyday by David Farland”