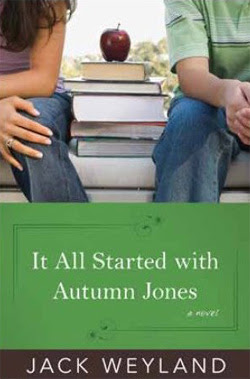 Title: It All Started with Autumn Jones

When Nick Baxter signs up for a class from the infamous Dr. Thomas Penstock, all he wants is the “A” he needs to get into law school. What he isn’t counting on is the outspoken girl in his class: Autumn Jones. When Autumn stands up on the first day of class and openly disagrees with Dr. Penstock, Nick is amazed, but also a little scared for her. Doesn’t she know Penstock is the meanest, most narrow-minded professor on campus? He can’t believe it when he actually convinces himself to stand up with Autumn and defend the beliefs they share.

Nick and Autumn begin studying together, preparing arguments for the discussions in Penstock’s class. Autumn is like no one Nick has ever met, and as they spend more and more time together, he finds himself falling for her. There’s just one major complication: Autumn doesn’t feel the same way. Autumn and Nick make a great team, but she is writing to a missionary and doesn’t want to let go of that relationship.

When Nick is able to help Autumn with a family crisis, he realizes she really is the girl he wants to spend the rest of his life with; but how can he compete with her perfect missionary? Will Autumn ever realize she and Nick could be more than just a good team?