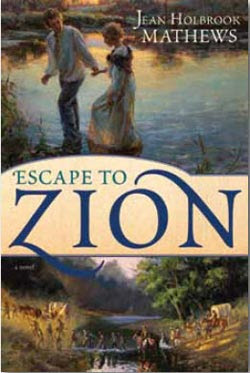 Maria stumbles across the rain-soaked forest floor, injured and breathless but determined to flee the baying hounds behind her. Reaching the riverbank, she plunges into the frigid water with only a fallen log for support. She can’t swim, but she has no choice—not with Lafayette Breaux on her tail. As the fastest of the hounds spots Maria, Breaux’s furious voice rises above their deafening din: “Find her! FIND HER!”

Sold as an indentured servant after her parents perished en route from Germany to America, Maria dutifully completes her ten years of service. But instead of granting her freedom at age eighteen, her master, Breaux, insists she is a metif (white) slave. Then he forces his will upon her, hoping to bind Maria to him for good. Now Maria is running for her life, hoping to cut all ties to her wicked overseer. Rescued from drowning by Hank Shroeder, she makes a new start in Mississippi as a freed woman and joins the Latter-day Saints—where she and Hank grow closer as they begin to lean on each other for support. But the malicious Breaux will stop at nothing to reclaim her as his own, and relentlessly tracks Maria—even as she treks West with her fellow Saints. Will she be able to escape her tormentor and find peace when she reaches her promised land?

One response to “Escape to Zion by Jean Holbrook Mathews”