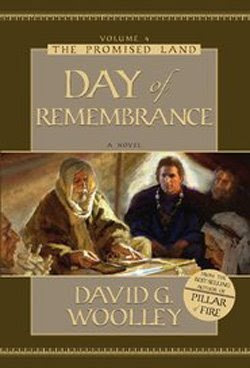 Old World, 600 BC: Under mandate from their prophetfather, the sons of Lehi face treachery and lethal danger as they seek to secure the brass plates from the ruthless Captain Laban. Meanwhile, Zoram and Elizabeth work feverishly to smith new plates for engraving the prophecies of Jeremiah— a vital task that must be completed before the Feast of the Trumpets, also known as the Day of Remembrance.

Old World, 19th century: In his home built above the remains of Laban’s treasury, Sephardic Jew Reuben Kessler anticipates the marriage of his son Danny on the Day of Remembrance. But when tragedy strikes on the blessed day, the devastated fathers of the bride and groom must cling to their faith that God will remember His covenant people.

New World, 19th century: Commissioned by the angel Moroni, Joseph Smith Jr. endures harrowing challenges as he prepares to receive the plates of gold and translate them into the Book of Mormon. The fulfillment of ancient promises draws near as Joseph returns each year to the Hill Cumorah on the Day of Remembrance.

Three families, three stories—yet in the grand design of the Lord, they intertwine as one. This fourth volume in the Promised Land saga bridges ancient and modern times to reveal the unfolding of a marvelous work and a wonder.

2 responses to “Day of Remembrance by David G. Woolley”