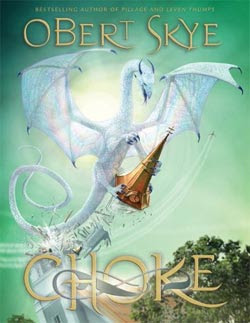 Pillage was the first of three books in the fantasy adventure that Obert Skye calls a Pillogy. Choke, the second, continues the eccentric adventures of Beck Phillips, who seems to have a knack for causing mischief in the secluded village of Kingsplot. In book one, Beck used his unique gift to unexpectedly hatch several dragon eggs. Thankfully, the dragons were destroyed . . . or were they?

In Choke, a stranger has discovered that Beck Phillips is the key to finding and hatching a lost dragon s egg a task that will bring the riches and fortune that Beck s family was destined to have. Beck learns that outward appearances can be deceiving and that grown-ups really do have valuable lessons to offer. Readers will laugh out loud at Beck s antics and sit on the edge of their seats while Beck and his friends confront Liz, the largest, most ferocious dragon Beck has ever seen!

« A Time to Die by Jeffrey S. Savage
Twilight: The Short Second Life of Bree Tanner by Stephenie Meyer »

2 responses to “Choke by Obert Skye”