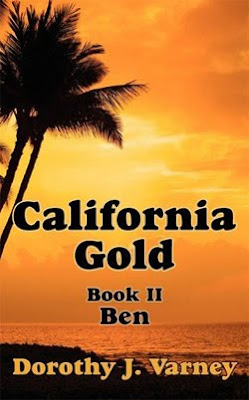 Ben continues the saga of the Varney family when he sails from California to the South Paicific as a youth of eighteen to act as agent for a San Francisco trading company. His father, Benjamin, gives him the painting, California Gold, to remind him of home.The Marquesas Islands hold him captive with their haunting beauty and mystery, despite the urgings of his family to return to California. He falls in love with the exotic Maruata, with whom he is forbidden marriage by their opposing religions. They compose their own rites and their union is blessed with several children. Ben prospers as a trader throughout the South Pacific. His store in Atuona, Marquesas, satisfies the needs and appetites of his friend and neighbor, the painter, Paul Gauguin. As Ben’s father struggled between his loyalty to home in New England and his fascination for California, so Ben is torn between his love of home and the allure of the islands. The California Gold painting aquires new value and significance.