Fourteen-year-old Cherrie Wilding stopped believing in fairies after her Grams had a stroke that left her a silent, empty stranger. But whether she believes in them or not, one of them bit her, and now the venom is spreading through her system and causing…complications. Like an allergy to iron and a craving for milk.

It turns out that fairy venom has the power to turn mortals into small, winged versions of themselves. And it gets better. Grams’s stroke was the result of her light—her fairy soul—being stolen. The fairy who bit Cherrie demands her to help steal Grams’s light back.

As much as Cherrie wants to save Grams, her need to protect her older brother from the fairies and the rest of the real world wins out. Who knows what lurks in a world populated by winged menaces? But when the fairy talks Cherrie’s brother into going to the fairy realm, Cherrie mounts a rescue attempt to save him. To her surprise, it’s not her brother who needs rescuing—it’s the fairies. Someone is stealing their lights and imprisoning them, and it’s up to Cherrie and her brother to free them. But saving the fairies, keeping her brother safe, and returning home requires the help of the Phoenix. And the price for his aid doesn’t come cheap. If Cherrie wants to succeed, she must be willing to part with her greatest possession: her heart.

Title: Bitten (A Novel of Faerie) 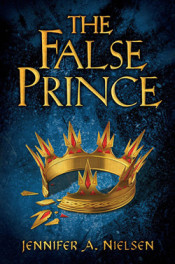 « Mythworld: Invisible Moon by James A. Owen
Curse of the Beast by Ashley Lavering »