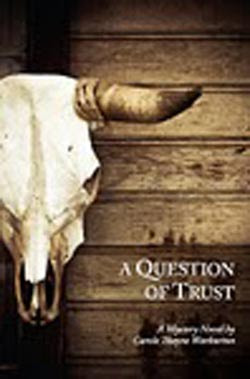 Title: A Question of Trust

Photojournalist Stacey Willis is working on a story that could change her career, when she stumbles upon the story that will change her life. Through a twist of fate, she becomes enmeshed in the lives of the people of tiny Grouse Creek as secrets of the past begin to unravel.

A half century ago there was a murder. But it’s difficult for Stacey to believe that aging rancher Herman Anders could be the killer. At least not the compassionate Herman Anders she knows. But can she trust her boyfriend, Dave. Her engaging new friend, Sam?

Although Stacey’s believing nature always leads her to interesting people, it sometimes leads to disaster in this story where first impressions are often wrong, and the bonds of trust and betrayal are equally strong.